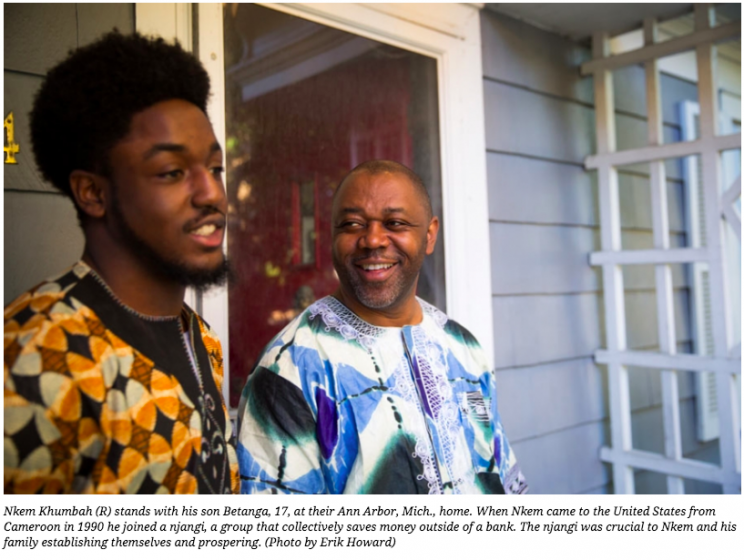 Nkem Khumbah immigrated to the United States from Cameroon in 1990. The seventh of eight children, he came for an education at the University of the District of Columbia. Determined to start building his savings, he worked odd jobs, often tutoring or working the front desk of an apartment building. In order to stick to a savings plan, he put $300 a month into his community’s njangi, and about a year later received over $3,000 to buy his first car. As more of his family came to the United States, the njangi grew to 30 participants. The family prospered, obtaining advanced degrees, buying property and starting businesses. Today, Khumbah is a lecturer at the University of Michigan-Ann Arbor.

Brazilian Jacqueline Muniz, 44, had a similar experience when she first immigrated to the United States. Informal consorcios were an integral part of establishing herself, and her community, in Massachusetts. She didn’t know about or understand the U.S. banking system—how to open a checking account or even what that was—so she turned to a consorcio to save money, contributing $100 a week. Eventually, she received $5,000 from the consorcio to purchase her first car.

Linda Silva Thompson is a born-and-raised U.S. citizen who worked in New York City with immigrants from all over the world. She participated in her workplace sousou, and with the money she collected, paid off her car loan and her children’s college tuition.

Njangi, consorcio and sousou are all words used to describe a “rotating savings and credit association,” shortened to the acronym ROSCA in English. In Peru, it’s called a junta or pandero. In Egypt, gameya. There are more than 200 words used around the globe. Often people know it by their native word, so if you ask them if they participate in a ROSCA, the answer is an emphatic no. If you explain what a ROSCA is, you might get an enthusiastic yes. It’s the most popular financial system you’ve probably never heard of.

Used for centuries in the non-Western world, a ROSCA works like this: A group of, say, 10 people (but it can be anywhere from a few to more than a hundred) decide they can each afford to save, say, $100 a month. So every month, the group collects $1,000. Each month, a different person in the group receives the full amount, until everyone has received it once. The circle is then complete and the group can decide if they want to renew, expand or shrink the circle, or change the amount contributed.

The order of dispersals may be determined by a lottery or democratically, based on need. When Khumbah’s nephew Moses Mbeseha, 27, had an unexpected car breakdown, the circle allowed him to trade places with the next month’s recipient. He used the $6,000 he received to purchase a new car.

The disbursement may happen at a monthly gathering, or one-on-one at a trusted community member’s home. In Khumbah’s njangi, the person who receives the money that month hosts a dinner at their house, a ritual that has created strong family bonds. Cousins grew up together, raised like siblings.

ROSCAs also offer a social support around savings. “As our banking system has become automated, where it’s just so easy to have full access to all of our cash 24/7, a lot of people find it difficult to save,” explains Linda Silva Thompson, who became a scholar of workplace ROSCAs, authoring a groundbreaking study on the practice: “Moving from Rags–to–Riches: Together or Alone? Underground Cooperative Savings—An Ethnography of Workplace Rotating Savings & Credit Associations (ROSCAs).” With ROSCAs, Thompson says, people’s “savings are out of their reach,” and available when needed.

It is not a formalized system. There are no laws, regulations or written documents that govern it. There is no interest, and there are no penalties or fees. There are no police involved if someone doesn’t fulfill their responsibility. The strength of the ROSCA is found in community.

AN ALTERNATIVE TO BANKS

Many U.S. households ta ke for gr anted that they can turn to banks for personal savings accounts, loans and credit cards, crucial to weathering financial emergencies and building wealth. But the banking system was not originally built for this purpose. The first modern central bank, the Bank of England, was founded in 1694 to help finance King William III’s war with France. Successive Western European banking experiments mainly involved colonial financial speculation by the wealthy—loans to fund the plundering of the “New World.” While banking services eventually expanded, bank loans and savings accounts are still only accessible to the wealthy and the urban in much of the world—1.7 billion adults don’t have a bank account, most of them in the Global South (but including 8.4 million U.S. households). In many rural areas, including some Native reservations in the United States, banks simply don’t exist. High service fees, barriers to credit and general distrust further deter the unbanked. In this context, forming a savings or lending circle with closely trusted people makes enormous sense.

In rural Cameroon, for example, where banks are scarce, participating in a njangi (also called a tontine in West Africa) was common for Khumbah’s family. It’s how his father saved for all eight of his children to go to school.

Even when people migrate to the United States, they still face obstacles to banking: lack of papers, no credit history, difficulty meeting minimum balances, language barriers or unfamiliarity with the system. As a result, a quarter of U.S. households headed by non-citizens (and 35 percent of those where only Spanish is spoken) have no bank account.

Instead, many immigrants use ROSCA systems to help establish themselves by buying a home or founding a business, or to fund their children’s education. One of Jacqueline Muniz’s friends in the ROSCA purchased a food truck. Another wanted to become a pilot, so he used the money to get licensed.

Outside the United States, ROSCAs sometimes exist in more formalized settings. In Brazil, for example, a consorcio might be organized by a car dealership, and everyone contributes monthly toward down payments on a car. There, consorcios are considered an integral part of the national banking system. More than 7 million people actively use this formalized marketplace to purchase products ranging from heavy machinery to real estate.

While people in many non-Western countries view the ROSCA as an important tool for asset building, ROSCAs are not part of mainstream financial thought in the United States. There are no hard numbers on their prevalence.

Some U.S. nonprofits are starting to spring up with the basic structure of a ROSCA, but a few key differences. Participants might not know one another, for example. In San Francisco, the nonprofit Mission Asset Fund functions like a ROSCA but requires a formal application and can be used to build credit.

While this process might be appealing to curious Westerners, one of the benefits of the ROSCA is, in fact, privacy. Not everyone wants to (or can) provide the information the Mission Asset Fund requires, like a Social Security number, pay stubs or proof of a checking account.

Many first-generation immigrants stay with ROSCAs even as they become established in the United States and gain access to common institutional financial tools—because the ROSCA system works for them. Their children may decide to opt in as well. “Many people join the [ROSCA] their mother joined. There’s a lot of trust,” explains Lisa Servon, a former member of the consumer advisory board of the Consumer Financial Protection Bureau and author of The Unbanking of America.

Khumbah’s son Atabong, 18, is heading to Brown University next year. Atabong has access to traditional American banking systems— he was born here, his father is now a university lecturer, and he’ll be attending an Ivy League school. “Things I had to deal with, he doesn’t need to deal with,” Khumbah says. But Atabong believes in carrying on the njangi tradition.

It is “the model I’ll always follow,” Atabong says. “It just becomes more of a conscious choice. This system is the one my family flourishes in. The concept of community is essential to those who are marginalized.”

Khumbah thinks that ROSCAs could be used as a tool for cultivating intergenerational wealth in the African-American community, helping to overcome the racial wealth gap caused by centuries of discrimination.

Thompson is one of the few Americans not from an immigrant community to join a ROSCA. She stumbled upon one when she worked at a commuter college in the New York City area, along with a number of immigrants from all over the world. She says the same “banker”—the person responsible for collecting and distributing the ROSCA’s money—held the role for more than 20 years. “Maintenance workers, professors and college administrators” all participated, she says. “It wasn’t just blue collar.” Through her research, she discovered that in “a lot of [police] precincts, correctional institutions, other colleges—any place where there is a sizable population of immigrants, there was a ROSCA.”

“What fascinates me is how well they can work and for how long,” Servon says, adding that those with adequate income and resources still choose to participate in these systems out of traditional cultural adherence, or simply because it makes savings easy.

She also likens ROSCAs to the Christmas Clubs banks once offered. Muniz echoes that sentiment: She says her brother-in-law just started a ROSCA where participants contribute $100 a week through Christmas—to save for, of course, Christmas.

Khumbah says that those few who miss their payments into the njangi are ostracized. When everyone in a ROSCA is from the same family or community, if you don’t pay, someone calls your father, your sister, your cousin or your spouse.

That doesn’t mean people don’t occasionally skip out on their responsibility, especially if they took the pool at the beginning of the cycle. Thompson recalls discovering a ROSCA where each of the members contributed $5,000 a month. “One guy … got his $50,000, and then he disappeared,” she says. “The risk is that they are unregulated. You really don’t have recourse. The concept is based on trust.”

ROSCA participants are aware of this as well. Amelton “Archie” Archelus, who immigrated to the United States from Haiti in 1994, now lives in Denver and has been looking to join a sol (a term for ROSCAs in Haiti) to help with unexpected expenses, but hasn’t yet found people with whom he’d be comfortable participating.

For Muniz, the consorcio is just a part of what Brazilians do to help each other. “I think American people just go to the bank,” she says with a light laugh. “We try to be friends and help each other.”

“As we grow, the support system grows,” Mbeseha says of his family’s network of njangi. “It’s a honeycomb.”

“Nobody gets less, nobody gets more,” Archelus says. “You don’t lose, I don’t lose. Everybody equal. Maybe one day Americans will know about it.”

This piece was posted at In These Times. Thank you for reading it. Please consider sharing it and making a gift in support of my work.